Albany Presbytery Visits the UN: A Recap by Elizabeth Meehan 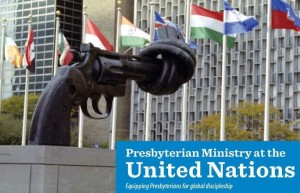 On October 12, 2015, a group from our area traveled down to the United Nations Headquarters in NY City. Their goals were to learn the role of Presbyterian Ministry at the United Nations, what’s being done in the area of the environment and eco-justice and what can local churches do to support these efforts. The Director of the Presbyterian Ministry at the UN, The Reverend Mark Koenig was very helpful in making arrangements for a very successful experience.  The trip was sponsored by the Albany Presbytery.

22 members of Albany Presbytery rode the Saratoga Presbyterian New England Congregational Church’s bus to NYC for a tour of the UN Headquarters and seminar on Environmental Justice. For many, it was the first to visit the UN and the chance to explore this international territory. Some even remembered to bring their passports and get them signed. The tour offered a behind-the-scenes view of the Organization at work and an opportunity to learn about how the United Nations addresses issues such as disarmament, peace and security, human rights, and the Millennium Development Goals. 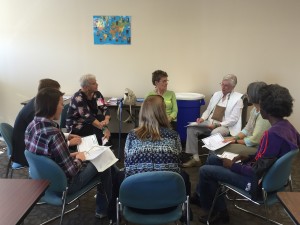 What Did We Do?

After the tour and a quick, but delicious lunch, we participated in a simulation exercise in which we each played a role in one of three man-made environmental disasters. The simulation was illuminating. We learned about real life events and how local residents were affected. We also learned that all three scenarios were located in areas of low income, employment and education. These folks were the hungriest for employment opportunities and payoffs for land. They were also the least likely to be educated about dangers until too late and to have the fewest resources to fight big corporations. In the end, the people with the least lost the most. 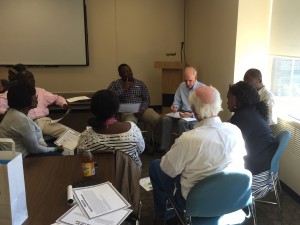 On the bus ride home and at a rest stop dinner, conversation and discussion continued. It was great opportunity to meet folks from different churches, to share our backgrounds and our reactions to the day’s experience.

Wow!  This is Important Stuff!

The Albany Peace Task Force recognizes how vitally important it is for the Church to take action to protect God’s earth and people from poor stewardship. They are in the process of developing a follow up activity on Eco-Justice for possibly around the time of Earth Day in April, 2016. 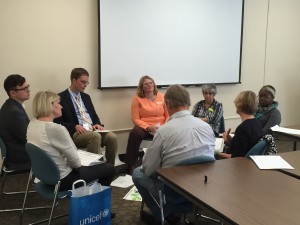 A View Snippets from Participants

From Belinda:
“It was an experience that Ben and I will cherish forever. The bus ride was better than we thought it would be. The group was awesome and the team at the Office was amazing.

Now the tour of the UN. That was like a dream come true. The many times that we had seen delegates in the security council and general assembly chambers on TV and to be actually there, to me was just unbelievable.

To see the photo of Kofi Annan on the wall with all his predecessors was really great.

The presentation and simulation back at the office were very touching. Especially knowing that these were the real life situations of real people, was very humbling.

Over all, this was as much a learning experience as well as a very fun trip. When is the next one, please?”

From Susan Plaumbo:
“I loved having the tour of the UN. Also, I found the simulation that we did very intriguing. Thanks for inviting all of us!”

From Kathy Sephas:
“The trip was on my bucket list. One down. The classes we took opened my eyes to how we need look at things from a global point of view.”

From Paul Randall:
“It was a great day! We were impressed with the professionalism of the UN guide and especially the savvy, sophistication and dedication of PCUSA staff. So much good information about UN’s areas of focus for the future.”

From Susan Bramer:
“While I loved and appreciated the trip through the U.N. building, (my first), what I deemed most thought-provoking were the role-playing sketches we did after lunch. Our group was portraying the lives of various people who were living with the effects of mountaintop removal.  I just finished reading “Gray Mountain” by John Grisham which addresses this very subject.  It’s scary to know that while we were role-playing, the scenarios portrayed were real ones, with real people living under this terrible menace.

And while the bus was not “comfortable”, it was not awful either!  Many of us had seats to ourselves, which made it a lot easier to store our gear, and also be able to sit!”

From Jessalyn Meehan:
“I didn’t know much about how/where the UN operates so it was great seeing where the magic happens and very comforting to know that there are people working on the big issues in our world. Hours spent on church bus are always a good time. And I had a good time with my mommy!” 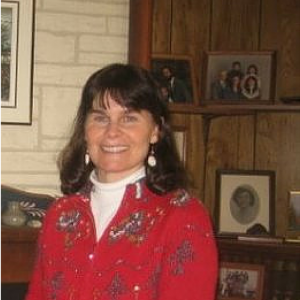 View a Facebook Album of pictures from our trip!

Elizabeth Meehan is a teacher and a  member of the Presbyterian and New England Congregational Church in Saratoga Springs. She is also a member of the Albany Presbytery Peacemaking Task Force.  Elizabeth chairs the Steering Committee for the Annual Saratoga Peace Week.  She may be contacted at Emeehan@nycap.rr.com.