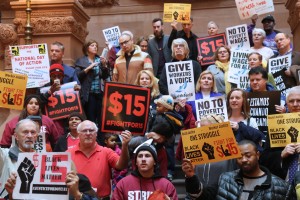 No Such Thing as Powerless
Sometimes in the life of the church – in prayer or in preaching, in policy statements and confessions of faith – we hear reference made to aiding “the powerless.” We speak of giving voice to “the voiceless.” These words are born, I think, out of a genuine conviction that our God is a God of justice, but when we use words like these we demonstrate a lack of understanding about how God works. There is no such thing as “the powerless;” there are only those who have been disempowered and those whose power has not yet been realized or organized. There is no such thing as “the voiceless;” there are only those whose voices have not yet been amplified above the din of the status quo or heeded by those who stand to gain from keeping things as they are. God places power in the hearts and hands of those who have been impoverished and pushed to the margins. That gospel truth was clear to me during this week’s “Fight for 15” day of action.

Protest, Testimony and the Presence of God
On Tuesday, November 10th, many thousands of low-wage workers in hundreds of U.S. cities held demonstrations to demand a living wage and the right to unionize. I was blessed (through the work of the Labor-Religion Coalition of New York State) to be able to spend the day with food service workers from the Capitol Region – many of whom were on strike and participating in social action for the first time. Booming voices reverberated in the streets outside McDonald’s and Burger King, as two powerhouse women led our group in rallying cries. The pre-school age child of one of the workers joined in, unprompted, and shook her tiny fist in the air. Another woman spontaneously re-appropriated a hip-hop song and turned it into a protest chant she could dance to. One young person told me she feared retribution from her boss and was too shy to chant or to dance, to make speeches or to shake her fist, but she showed up anyway and looked for a place in the movement as an introvert. We heard testimony from a man who is routinely forced to choose between paying rent, paying for college, and paying his wife’s medical bills. We met a 17-year-old girl whose home burned down last year and who is now working two fast-food jobs to support her family. She was so inspired by her fellow workers that she walked off the job that day and joined the strike. When we briefly obstructed a McDonald’s drive-thru as part of an action, one angry driver hurled insults and accelerated towards us as though he might run us over, but the line of workers stood their ground and protected each other. It’s clear that there is much work to be done, but I didn’t meet a soul all day that was “powerless” or “voiceless.” I could see Christ clearly in each one of them.

It’s About More Than Money
Most of these brave and hardworking folks make just $9 an hour or less.  Some of them haven’t received a raise in almost a decade. They represent a small fraction of the millions of hard-working New Yorkers who do not make enough to support themselves. Regardless of what a person does for a living, as people of faith we ought to affirm that all work has dignity, and that no working person should be made to suffer in poverty. There is tremendous progress being made on raising the minimum wage, but lawmakers do not seem to understand the urgency of setting things right, or the terrible consequences of failing to act decisively and swiftly. When we deny these workers a living wage we deny them access to healthy food, safe and stable housing, adequate healthcare, and decent education. We place their lives and the lives of the children who depend upon them in jeopardy. In short, we stand in the way of God’s promises. And as we doom them to cycles of poverty, we undermine our entire community and our collective future.

The Workers’ Story is Our Story
The courageous workers with whom I was privileged to stand this week are risking everything to make their voices heard. The church should be there to support them every step of the way. Each of their stories is one that should matter to us, and all of their stories are part of a larger story. It is not only the story of millions of workers in hundreds of cities – It is the story told by Jewish and Christian scripture and traditions. It is the story of God’s movement through history on behalf of those who have been exploited, pushed around, cast aside and silenced – whose rights are snatched away and whose wages are withheld. It is the story of how God acts with power through and for those people; how God liberates and brings justice and restores right relationship; how God breaks the rod of the oppressor and grants access to the abundant life that is meant for all.

When workers stand up, I believe that God stands with them. When employers or politicians or others who don’t understand, lash out and disregard the voices of the poor without concern for their well-being, we have the authority of our faith to say to them, “No, no, no. Pharaoh already tried that.” Our story began with a labor dispute, but God brought our ancestors out of captivity in Egypt, and God will keep on bringing us out until we stay out and commit at last to the long journey toward the promised land. It is not our job to give power or to give voice – God has already done that. Our job is to show up for the people that God loves, to honor their risks with our living, and to involve ourselves – our power, our voices – in what God is doing. Let’s do our job.

To learn more and get involved in the Fight for $15 in New York. 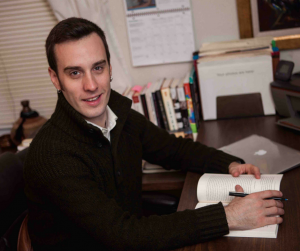 The Rev. Drew Paton is pastor of St. Peter’s Presbyterian Church in Spencertown, New York. Prior to answering the call to Spencertown, Drew served as Pastoral Associate at Jan Hus Presbyterian Church in New York City, where he ministered to and advocated alongside homeless New Yorkers. In his previous role as Program Coordinator for Bridges to Community, he collaborated with rural Nicaragua communities to implement sustainable solutions to poverty. Born and raised in the Hudson Valley, Drew is a graduate of Union Theological Seminary in New York City. He can be reached at stpeterspcpastor@gmail.com.  You can also follow Drew on Twitter @Drew_Paton.