Biblical Theme for the Day:  Let my People GO – Exodus 3-7

This is a long biblical passage to post in its entirety, so here is a link to read it!

“Today, it was a special day because our scheduled programs were sort of flipped. We started out having rec time first, which is normally what we do last each night. Delegation and small groups were later today. Today was the last day of small groups and we all formed a bond and made many new friends. It was sad to see them for possibly the last time. We’ve learned so much throughout this week and it’s sad to see it coming to a close. I’ve grown as person and this experience I think had changed me. Im going to try my best to act out what I learned here back in New York. One preacher we had said, “it’s not the teacher’s job to force you to learn, it’s their job to put it out there, and for you to do what you want with it.” So it’s going to be my responsibility to put into use what I’ve learned here this week.”

From Mia Robinson:
“Today was the last full day of my last Triennium which is sad but, I can’t forget how much fun I have had learning about my faith and meeting new people. Saying goodbye to my small group was really hard they were Amazing and probably the best small group I have ever been in. I went to a go group about becoming a YAV(young adult volunteer) it is really something I am going to think about it sound like and amazing opportunity. I have also LOVED the sermons at worship the speakers were amazing and their messages were relatable and presented in a way that youth would find interesting.”

From Dave Haase:
It’s been a prayerful time, highlighted by a visit to the Prayer Center. The prayer center is an area with many stations in Stewart Hall. When I walked in, the smell of baking bread was ubiquitous! The Center had rocking chairs with a peaceful scene including some water fountains, and some relaxing music through headphones. There were other stations where you could write our prayers, color, weave, do crafts, write in a notebook they gave you. It was a feast for the senses and you could engage in activities for many personal prayer styles.

But did the prayer center have a labyrinth, one might ask? (Well, my Pastor Miriam Lawrence Leupold might ask…) Oh, yes it did! Had to walk the labyrinth. It’s a favorite discipline of mine. I don’t think I’ll be reproved overly for thinking of the labyrinth as a metaphor for life. Other walkers were following the path along with me. Most went faster that I did, but it was easy enough to stop and let the speeders by.We had to tell a story using only tweets earlier in the week. Some occurred to me as I walked the labyrinth:

To say it’s been hot and humid out here is an understatement. It’s been quite sticky. We were very grateful to have an air-conditioned dorm! Apparently the New Jersey Presbyteries signed up as one group. That meant 2 to 300 kids needed housing. They did not register early, either, and they were housed in non-air-conditioned housing. Some of our guys took pity on them and allowed the boys to use our bathroom to shower.

The boys were housed in Duhme (due-mee) Hall. Or “Dummy” Hall as certain persons residing in the other housing called it. We males did not find that nearly so humorous. The dorm was named after Ophelia Duhme, a woman who Jerry attests was dedicated to “gracious and purposeful living”. Any Presbytery members are forewarned that Jerry has a new catchphrase, “gracious and purposeful”. You may, like our adult team has many times this week, hear the new catchphrase during meetings; it grows on you after a while.

Perdue has a lovely campus and we got to see quite a bit of it. Average walking for Triennium has been somewhere around 24,000 steps per day. We found Starbucks on our way, this became a daily ritual.

Hard to believe it’s been five days. The time has been precious to me, time to unplug from work as well as a spiritual retreat. We’re ready to come home now, after work and play, some laughter and tears. I can’t speak for the others, but I’ve seen the Holy Spirit at work here and had a great experience. Thank you to my fellow adult volunteers, Christy, Becca and Jerry. It’s been some work, but I haven’t laughed so hard in a while as I have with you all. Thank you to the Presbytery, for supporting us all and making it possible. Thank you to the Presbyterian Mission Agency, who sponsors the Triennium. Thank you to the volunteers who served at Triennium.

We thank Jesus Christ, our redeemer, who inspires us to be good neighbors, to “go and see”, to pray without ceasing, and to follow our call. 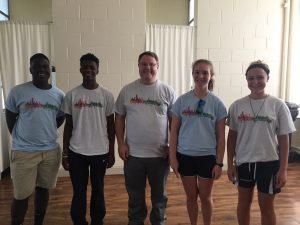 We are honored to have a team of bloggers from Triennium sharing their experience with us each day this week.  Every day we will have a new team of youth, college students and adult advisors who will blog/vlog and share image content to share the story from the 2016 Youth Triennium.  Today’s team is: David Haase (Adult Advisor, First/Albany), Mia Robinson (Youth, First/Albany), Arthur Iyok (Youth, First/Albany), Robert Quaye (Youth, Westminster/Albany), Joseph Reisner (Youth, Westminster/Albany), Madyson Mulyca (Youth, Christ Church of the Hills, Rotterdam)

The purpose of the Albany Presbytery Blog is to share information, tell stories, and promote the mission and ministry of the presbytery, synod and beyond.  While the breadth of this medium is intentionally broad, it is not a platform for opinion pieces related to business coming before the presbytery unless designed as part of an initiative to provide a diversity of viewpoints at the direction of the presbytery council.   Exceptions to this policy may be brought to the presbytery officers who will determine appropriateness of submissions.