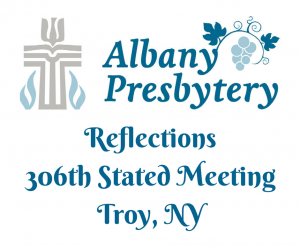 Please share this information with all those interested in the work and opportunities happening in the Albany Presbytery. You may use the following URL to embed directly into your communications: https://albanypresbytery.org/reflections-jan-30-presbytery-meeting

The 306th Stated Meeting of the Albany Presbytery was held on January 30, 2016 at the Brunswick Church in Troy, NY.  Much good work was done!  Below are a few snippets/reflections offered from some of the shared business.  Official minutes will be available in April.

A wonderful observation from our meeting.  While conducting all manners of business, joyful, intense and sorrowful, as a body, the Albany Presbytery prayed five times before lunch!  We ARE a community of faith and looking to serve Him as we are we are called and equipped.  Be encouraged and Glory to God Alone.

Highlights from the January 30th meeting listed below include the following reports.  See below for more details.

Jerry McKinney, Moderator, Albany Presbytery
“The Presbytery of Albany gathered at the Brunswick Church for our first meeting of 2016.  This year we will be working intentionally on our transition.  Through this transition we hope that our Presbytery can become more relational, more connectional, and more missional.  The Presbytery Council is working diligently to make our Presbytery meetings a time for building relationships, making connections with sisters and brother in Christ, and working together in mission.

Our January meeting was a time for celebrating relationships: we welcomed the new pastor of the Stillwater Church, and we gave thanks for the ministries of two of our retiring teaching elders.  It was a time for making connections: we celebrated and affirmed a new partnership agreement with the Mam Presbytery in Guatemala.  And it was a time for strengthening our mission together: we heard a great sermon that challenged us to do the “work of the church,” not just “church work,” and we were nourished at the Lord’s Table where we received our “star word.”

I hope these reflections will be an inspiration for us as we begin this new year.” 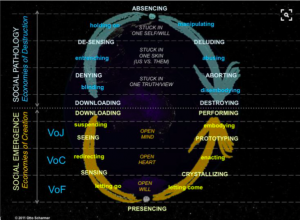 Shannan Vance-Ocampo, Transitional Presbyter
Transitional Presbyter’s Report
“We are entering a time in the Presbytery this year of high decision-making.  In my report I discussed the image from one method of “change theory”, which is called Theory U which shows that our future is something that we co-create. We discussed how our co-creation is a theological principle, we co-create with God, and then we co-create in community with each other.  I challenged the Presbytery to image ourselves as co-creators and to hold this principle of change with God and change in community in mind as we discern many things in 2016 and image the future to which God has already prepared for us as a gift.”

Laura Rogers & David Bennett – Co-Chairs, Committee on Ministry
Highlights from the COM Report — Stories of Transition within Albany Presbytery
“We celebrated the ministries of Cheryl Peeslee and TE Aline Russell and wished them well in their retirements.  Cheryl served the Waterford Church as a pastor in the American Baptist tradition.  TE Aline Russell served the Stillwater Church as their Interim and also served on the Committee on Ministry.  Aline is returning to Illinois to be with her husband, Mark.

A New Beginning — Albany Presbytery celebrated the birth of Adirondack Church WOW (Worship Without Walls), our second New Worshipping Community, which, just days before the presbytery meeting, held its first worship service — in a yurt — at the base of Gore Mountain– in Northville under the inspiration of TE Lucy Harris.

We welcomed — and examined for ordination Rachel Mastin who will serve the Stillwater Church beginning March 14.

We said farewell to the Corinth church and TE John Aldrich as they depart for the ECO.”

Gusti Newquist, First United Presbyterian Church of Troy
Teach-in: The Refugee Crisis and How We Can Serve
“I was thrilled with the attention and interest shared by the presbytery in the work of the US Committee for Refugees and Immigrants (Albany Office). I know the First United – Troy Mission Committee will be following up with ways we might be connected. Others who are interested in joining with us are welcome to contact me, or the USCRI Albany Office directly.”

Borderlinks Trip – M.J. Pattison
Invitation to join their trip to Arizona in April.  More information can be found here: Immigration Crisis – An Opportunity to Learn More and Make a Difference 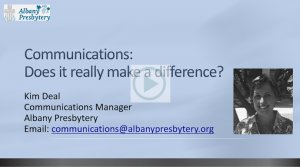 “Engagement in communications is the key to success.  Choose the communications medium you prefer, and participate.  We can’t continue to raise visibility to and make lasting progress on the transitional work without more people making a committed choice to get involved.  Participate via personal meetings.  Can’t get there, leverage Internet technology to participate.  Read and share our newsletters and online blogs.  Help more people subscribe to our E-News via our website.  Write a blog.  Engage with us on social media.  Partner with us and cross-promote each other using our websites.  I plan to create a video the training for that I offered on Jan 30th for your reference, but in the meantime, you can find more information at:

Tim Coombs, Associate for Congregations, Albany Presbytery
Report: Youth Triennium
“Christy D’Ambrosio will be sending in Triennium registrations shortly.  If you have a youth who wants to attend this summer’s Triennium, please contact her ASAP!”

More information about Triennium can be found on the website: https://albanypresbytery.org/event/presbyterian-youth-triennium  You can reach Christy at: christy@firstpresalbany.org

Kathy Gorman-Coombs, Co-pastor of Trinity Presbyterian Church, Scotia
Report: Guatemala Taskforce
“Albany Presbytery now has a renewed mutually affirmed partnership agreement with our brothers and sisters of the Mam Presbytery.  Many people have worked and prayed and talked and translated and prayed some more to get to this day, when the written agreement truly represents a relationship through which we are, with God’s help, “encouraging one another to greater faithfulness.” Women and men and youth of both presbyteries have been involved in and are being transformed by the power of the Spirit through our mutual connection. Que Dios nos bendiga a todos!”

Jahnn Swanker-Gibson, Peacemaking Taskforce
Montreat Conference on Earth Care
“I reported on the Earth Care Conference that I attended in Montreat, NC this past September.  I truly feel that global warming is here, and is human-caused.  Even if it were not entirely human-caused, would we not want to do our utmost to mitigate it.  After all, we lock our doors when we leave the house on the off chance we may be burglarized.  As Earl Johnson said, “If we don’t do something about global warming, all our other issues are moot.”  At any rate, after reporting on the conference, I mentioned many ways that we could help our environment through conservation of fossil fuels.  Certainly, we could call Solar City or Ethical Electric to convert our electric usage to solar or wind in our homes and churches.  Our churches could become earth care congregations.  There is an application form at pcusa.org/environment earth care congregations.  I also stressed the fact that our lawmakers do not know how we feel unless we tell them.  Meanwhile, they cowtow to the big fossil fuel companies who give them big campaign contributions.  So, to this end, I spend an hour each week at a busy corner downtown demonstrating with signs against global warming.  Friends often join me.  I encouraged everyone to take time to do this in their own communities.  Our congressmen need to know that we are interested in electing lawmakers who make laws to protect our environment, not the pockets of big business.   One might also write one’s congressmen, and send letters to the editor of their local newspapers. Think, what would Jesus do??”

Paul Randall, Peacemaking Taskforce
Fossil Fuels Divestment
A small group of Presbyterian leaders reached a tipping point after Republican frontrunner Donald Trump proposed a temporary ban on all Muslims entering the United States.  They had been concerned for a while about the political discourse regarding refugees and immigrants — rhetoric they considered to be a direct challenge to Christianity’s most fundamental convictions.

So Erskine Clarke, a professor emeritus of American Religious History at Columbia Theological Seminary in Georgia, reached out to fellow seminary professors and pastors in early December in search of a way to counter the words of candidates who were invoking the Christian faith as rationale for their words and actions. Some in the Triangle were on the receiving end of his inquiry.

What resulted was a seven-paragraph statement, “An Appeal to Christians in the United States,” that was posted online at the Journal for Preachers website and has gotten more than 2,100 signatures.

Cara Molyneaux, Vice-Moderator & Dan Rogers, Stated Clerk
Council Report
“The most up-to-date 2016 Listing of Overtures that have been submitted to the Office of the General Assembly (OGA) by other presbyteries may be found at http://www.pc-biz.org/ under “Resources”. The listing is updated regularly as new overtures are received by OGA. The listing includes the names of the initiating presbyteries and those presbyteries which have acted to concur.

Members of Albany Presbytery and congregations within the presbytery are encouraged to review the Listing. Detailed texts of the overtures are not yet available on pc-biz. However, members are invited to contact Stated Clerk Dan Rogers who is able to provide the texts of overtures electronically. Or members may contact the initiating presbyteries directly.

The Council is requiring that all requests for Presbytery to consider concurring with an overture be submitted by at least five individuals from at least two congregations or by formal action of one session.

Any session or group requesting an overture to be brought to the floor at the April Presbytery meeting will need to prepare and submit a 3-4 sentence rational to the Stated Clerk no later than March 21st.  Any questions should be directed to Dan Rogers at drogers@albanypresbytery.org.”

Kety Stenta, New Covenant Presbyterian Church, Albany
Report: Stewardship Mission and Interpretation Committee
“I would like to introduce myself as the new chair of the Stewardship Mission Interpretation Committee (SMI)–Pastor Katy Stenta, teaching elder at New Covenant Presbyterian Church. This committee is concentrating on interpreting and communicating about money at the Presbytery level.  As of last year, basic witness giving was as expected. Shared Witness Giving–the money that we use to help our mission partners and do mission at the Presbytery level– has been not consistent.  Most people at the church level, do not understand the shared witness giving money.  Thus SMI will be sending quarterly bulletin inserts, using the Presbytery E-news and sending postcards to communicate what benefit that money provides.  Finally, we have had a plethora of Mission Trip Scholarship forms, which we are hoping to distribute the moneys for in February!  This may be the last of what has been a great scholarship based upon the surpluses of the shared witness giving.”

Thank you all for your service.  Official minutes will be offered in April.  See you at the next Presbytery meeting on April 6th!