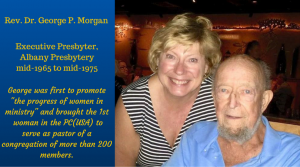 The Rev. Dr. George P. Morgan entered eternal life December 2, 2015.  I am grateful for what he meant in my life and to the Presbyterian Church (USA).  He was responsible for my coming to Albany Presbytery in 1968.  Oral history says I was the first woman in the PC(USA) to serve as pastor of a congregation of more than 200 members, the Woodside Church in Troy, New York.  Thanks to George Morgan, Albany Presbytery made that distinct contribution to the life of our church, and to the progress of women in ministry.

My own presbytery exec in Palisades Presbytery told me in so many words, “a woman’s place is in the home!”  Only George Morgan, the exec in Albany, believed that a woman could be a pastor.  All the other execs in the eleven presbyteries of the NYC consortium would just hem and haw and stutter when I asked them to show my papers to a congregation. They were afraid that the churches would think they were trying to pull something over on them if they dared to suggest a woman candidate.

The Ford Motor Company can take some credit, too.  The new PNC chair at Woodside Church was the Manager of the Green Island Ford Plant.  Ray Siek had just returned from Detroit where the Ford Company had impressed upon its managers that if they passed up the women in their companies for promotions, they would be cutting themselves off from some real talent and promise!

George had previously shown my papers to the former PNC Chair at Woodside, who had resigned after a year of unsuccessfully looking for a pastoral candidate.  But when George asked Ray Siek if he was open to a woman who had some of the qualities and experience they were looking for, he thought just a minute and said YES!   George arranged a preaching date for the committee to hear me in an Albany congregation.  George took me on a tour of the Capital Area and convinced me that this NYC woman could thrive in upstate New York.  The vote of the Woodside congregation was almost unanimous, with just one abstention.  I had been searching for two and a half years, and now the first congregation that interviewed me, called me.

I served as Moderator of Albany Presbytery in 1974, the year we helped elect the Rev. Bob Lamar as General Assembly Moderator.  When I represented Albany Presbytery as a GA Commissioner the following year, I was one of only seven women minister commissioners present, 17 years after women’s ordination began in the Presbyterian Church. 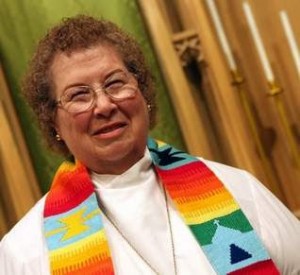 The Rev. Margaret E. (“Peggy”) Howland was the first woman pastor in Albany Presbytery at Woodside Church in Troy, 1968 to 1977, serving as our presbytery moderator in 1973-74 and as Synod of the Northeast moderator in 1987-88. Now living in a Presbyterian retirement community in Orlando, Peggy is still working for full equality for all persons.