Picture above: From the left: Robert Lyons (Prospect Hill [Iowa] Presbytery), Zachary Caloritis (Gennessee Valley Presbytery, Synod of the NE), Cassandra Laughlin (Washington [PA] Presbytery). This picture was taken right after 06-09 was finished on the floor.

I will be completely honest, I expected to come to General Assembly and be a quiet observer on the committee and plenary floors. If you know me, you know that’s not my normal style, but I was unsure as to what this experience would be like. I felt as though there would not be many overtures that would speak to me and rise for a call to action. Once I got here, I found out I was wrong. I became immersed in the business before me, specifically overture 06-09. This overture was written and submitted by the Synod of the Northeast, the Synod our Presbytery belongs to. That being said, I’m not the kind of person who will vote for or against something just because or who or where it originated. 06-09 called for a change to the Book of Order, asking that individually commissioned ruling elders not have to first serve on a session, as is currently required. This would allow for young adults like myself, members of immigrant fellowships and new worshiping communities, as well as spouses of pastors to  become elders without having the burden of serving on session immediately. It would provide an opportunity for more diversity and inclusion, something the Presbyterian Church strives for.

As wonderful as this sounds, there were many people in my Committee who were against it. The initial vote to approve failed 28-31. In keeping with Robert’s Rules, we had to then vote to take a different action on the overture. This time, 06-09 a 44-11 vote to disapprove was cast. The total number of votes was different, as some people were not in the room when it was cast or abstained. Despite this recommendation of disapproval, the overture was not completely dead.

Before 06-09 got to the plenary floor, I had several days to lobby my fellow YAADs, write my floor speech (and then re-write it due to the time limit cut by 30 seconds), and build up a game plan with everyone involved. It was grueling but I learned a lot.

Finally, it was the day. We were behind schedule (not much of a surprise to anyone who has been to GA before), so my committee’s business was not scheduled until after lunch. Once overture 06-09 was on the floor, I quickly made my way to the nearest Advisory Delegate microphone. I was the first one there, which was both exciting and nerve-wracking at the same time. After the committee’s recommendation was read, my microphone was the first to be recognized by our Co-Moderator, Denise Anderson. I introduced myself and read the following statement to the hundreds sitting around me: 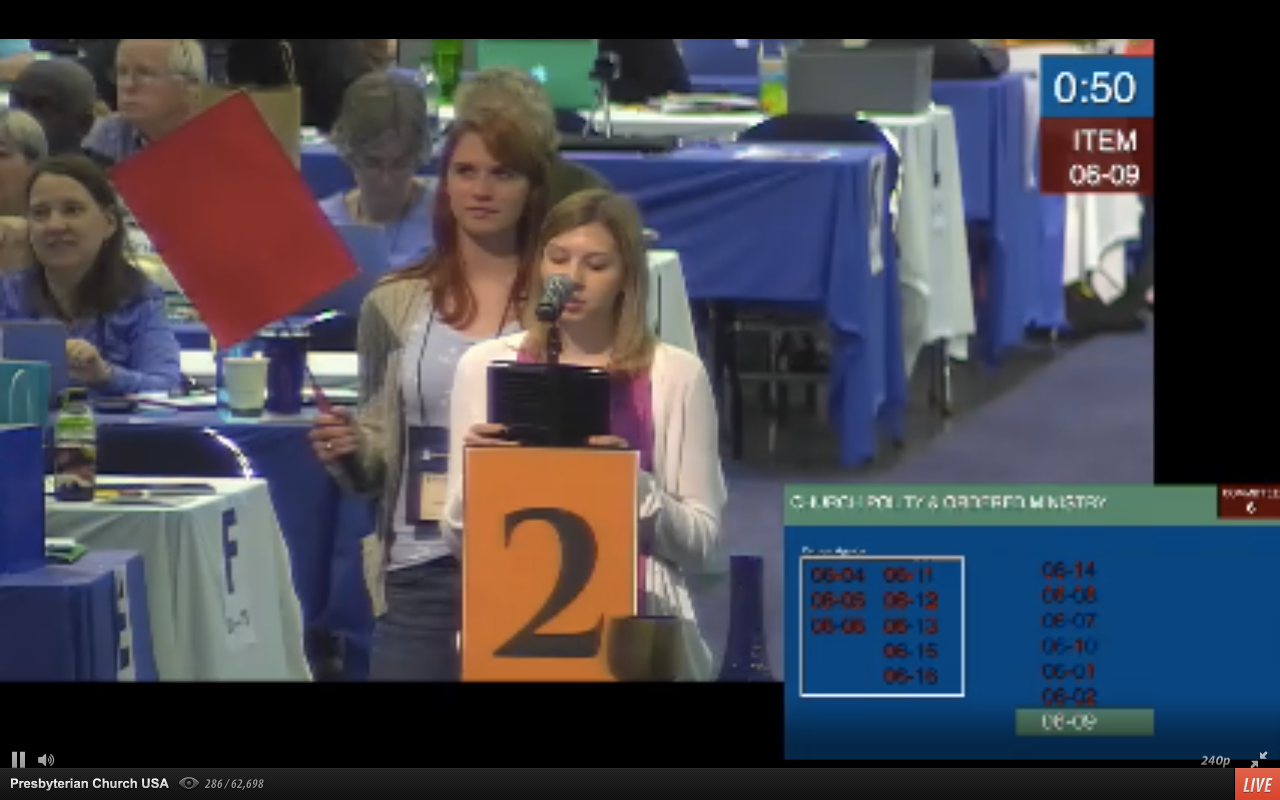 “I’m here to speak against the motion as recommended by the committee. F-3.0202 from the Book of Order states, “This church shall be ruled by presbyters, that is, ruling elders and teaching elders. Ruling elders are so named not because they “lord it over” the congregation (Matt. 20:25), but because they are chosen by the congregation to discern and measure its fidelity to the Word of God, and to strengthen and nurture its faith and life.” It does not state a required age, race, enthnicity, gender, or sexual orientation. Young adults like myself are told we are the future of the year Church, but we are ALSO the present. We are willingly bringing ourselves to the Church, eager and ready to serve our congregation, yet many of us are met with resistance from many sessions who are unwilling to call and ordain young adults to the office of ruling elder. We are told to “wait our turn” until we reach an age that is somehow “acceptable” (to be a ruling elder). If young adults are not able to become involved through equal and fair representation, the downfall of the Church as a whole is certain. Because we are not allowing our young adults to serve in this manner, we are squandering an amazing opportunity for diversity in discernment and decision making among our ruling elders. Thank you.”

I don’t remember the entire experience, it was as though I was in my own little bubble. After I finished I returned to my seat and was met with congratulations from Glenn and Lynn. I had no more than a minute until another fellow YAAD was at the mic, speaking for the same issue as I had just done. When the discussion and amendments had finally come to an end, overture 06-09 was voted to be sent back to the Office of the General Assembly (OGA). The reason was that it needed more revision, and was best to be revisited at the 223rd General Assembly in St. Louis.

Though some may see this is a failure, 06-09 is not dead. It is very much still alive! Being referred to OGA only gives it a better chance of approval the next time it comes before an assembly. This was by far the highlight of my GA experience and I hope I can be present in St. Louis to see what happens to overture 06-09 next!