Standing on the Rock in Aleppo, Syria I first met Eleanor, Matthew, and Lutha in 2010 when I was visiting the church their father pastored. Having PK’s (pastor’s kids) of my own, I was delighted that they too had that sense of ownership of the church building that only PK’s can have. They showed me around all the nooks and crannies, all the shortcuts and all the great hiding places. They seemed extraordinary in that ‘above average” kind of way. 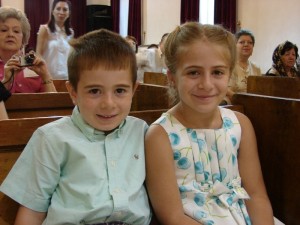 After worship we sat out in the courtyard of the church on a beautiful May day. I read a book brought to the children by the woman from our group who had preached (by holy coincidence, this was her first sermon as ordained teaching elder.) Around us, people were talking, sharing coffee, visiting with each other. The climbing flowers were in full bloom and their aroma filled the air with sweet fragrance. It really was a magical day 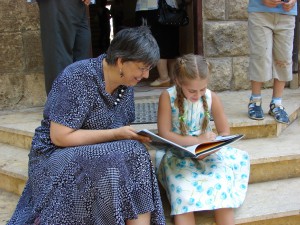 While we returned home to tell of the extraordinary people of Lebanon and Syria; Eleanor, Matthew and Lutha’s home descended into chaos. In 2012 the building whose nooks and crannies I had been shown was destroyed. The steps were rubble, and the courtyard was gone. The church was forced to gather for worship in a fifth floor walk up (105 steps the PK’s informed me) with no water or electricity. Upwards of 100 people squeeze together to hear God’s Word, sing hymns of praise, gather at the Lord’s Table, and find the strength to live in a war zone.

“We stay, because we are called by God to stay. We trust God.”

In July 2015 I returned to Lebanon to participate in a women’s conference with 6 other American Presbyterians and nearly 100 Lebanese, Syrian, and Iraqi Presbyterian women. When the whole Nseir family arrived from Aleppo, it was like a family reunion. Their trip had been long and dangerous; their daily lives are so difficult. They were tired yet overjoyed.  “We stay, because we are called by God to stay. We trust God,” Tammie Nseir, Ibrahim’s wife and the children’s mother explained.

Syria, Through the Eyes of the Children

Once settled, I got to talk to the children. I asked Matthew, now 12 and Eleanor, now 14 what they remember from before the war. They spoke of playing with friends, going places without being afraid, running water, the Internet, video games.

“How has the war changed your life?” I asked.

Matthew responded, “The war has taken away my childhood. All I do now is tote water from the pump to our home, or the homes of people.”

“Every day is so boring,” Eleanor and Matthew agreed. “Before we used to play with our friends, now all we do is sit in our apartment with nothing to do. Our lives are filled with boredom or fear. A bomb blew up right next to our father’s car. But mostly we have nothing to do, except play the piano.”

Yet the church in Aleppo has been very active supporting and caring for each other; providing for people who have lost everything. And in the midst of all the destruction, with daily explosions, and limited resources, they have decided to rebuild their sanctuary. As their sanctuary rises out of the rubble it has become a symbol of hope for their community. This brazen act of defiance in the face of overwhelming odds is saying to the forces of destruction that the rock upon which the church is built will not be moved. Christians will continue to worship and witness in this place as they have since the 2nd century.

Five years ago, I thought the Nseir family to be extraordinary in that “above average’ sort of way. Today I realize that they are extraordinary because they are holding on with all their might to the hope that Jesus is present in Aleppo and they have been called to stay and serve with Him there.  Besides, who knows what great pianists Eleanor and Matthew may become because their lives have been so boring!