Recently the Vision Team presented a report to the Presbytery including the two graphs shown below, showing the membership of the counties that make up the bounds of our Presbytery and the U.S and Census data for the same region.  Jim Reisner remarked that for him, these are the two most hopeful graphs from our investigations this summer as they show that we live in the midst of a wide open mission field.  Presbyterians make up less than  0.5% of the population within the bounds of Albany Presbytery. 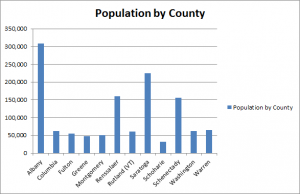 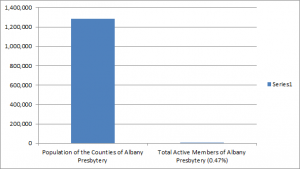 Years ago we were a “sending” denomination.  We assumed that since we lived in a “Christian nation,” we would send mission co-workers (then they were called missionaries), “over there”, to other countries, to grow the Church.  Now there are more Christians in some of these places than in the “sending” countries of that time.  And we live in one of those places, here in upstate New York–A Mission Field!

Think of what “missionaries” of the past did: 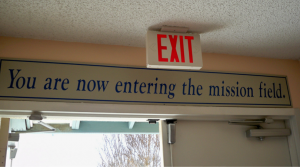 Can we be missionaries right where we live today?  In the Oct E-News, I list questions to think about in regards to the potential for mission work.

I love this photo from the inside of the door of a church. You are now leaving the church building…and you are now entering THE MISSION FIELD!  Every single one of us is a “missionary!”

The Presbytery is engaged in its transitional work but that will only bear fruit if we all begin the soul-work of switching our mentalities and shifting our focus!  We can do a new thing (no matter how daunting it may seem) because we follow the God of Resurrection!