Why $15 Matters by Emily McNeill 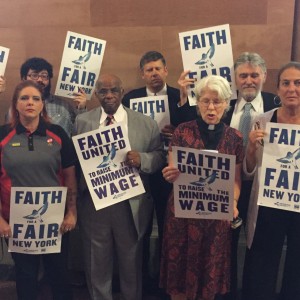 But here’s the problem.

According to MIT’s living wage calculator, a single adult in Albany County needs to earn $22,760 before taxes to make ends meet. In Kings County (the most expensive), that number is $29,736, and in Wyoming County (the cheapest), it’s $19,739.

Even those workers who are able to get full-time hours can’t support themselves, let alone other family members, no matter where they live in the state.

The consequences of this gap are devastating to individuals and families. Most low-wage workers are not young people earning spending money or “training” for a higher paying job. 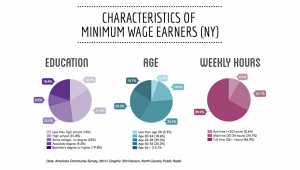 Monya, a certified nursing assistant in Buffalo, is just one example. She is trying to support a family on her wage of $10 an hour.

“More than half my paycheck goes straight to bills, with hardly anything left over for me and my kids,” she says. “The work I do is important in the lives of the resident I care for, but the pay leaves me painfully short in my ability to take care of my own family.”

Low wages are a moral problem – for all of us

This discrepancy between what employers can pay their workers and what workers need to survive is not only an economic problem, it’s a moral one. As long as work is the way that people meet their basic needs,how we value people’s labor is directly related to how we value people’s lives. If we believe in the dignity of all human beings, we must insist that all workers are at least paid a wage that can support a decent life.

Right now a campaign is underway in New York State to raise the minimum wage to $15 over 3-6 years. If the proposal passes, more than 3 million workers would get a raise that would make a real difference in their lives.

In order for this campaign to be successful, though, New Yorkers across the state need to speak up. We need to push back against those who argue that some people don’t “deserve” to make a decent wage. We need to arm ourselves with facts to counter those who cynically claim that living wages would hurt our economy. And we need to tell our elected representatives why we believe that raising wages is a moral imperative.

On February 11, a coalition of faith, labor and community groups in Albany is hosting a community teach-in. The event will be an opportunity to hear from low-wage workers, policy experts, and community organizers about why raising the wage matters, to ask questions about how the increase would impact our communities, and to learn how to be involved in organizing and advocacy. All are welcome at the teach-in, which will take place from 6-8 pm at 115 Washington Ave. in Albany. 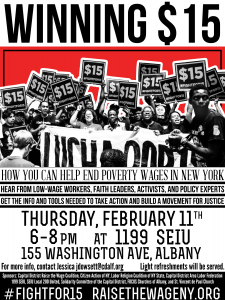 The proposed increase to $15 won’t solve the crisis of poverty in New York State, nor will it guarantee that millions of low-wage workers are treated with the compassion and respect they deserve. All of us who believe in the inherent dignity of all people should be prepared for a long struggle to truly end poverty and protect human rights in our state. But raising the minimum wage to $15 is a significant step, and we should all do what we can to make sure it happens this year.

Come join us on February 11th for the Winning $15 Teach-In.  Find the details online at the Albany Presbytery Event Page: Teach-In: Winning $15 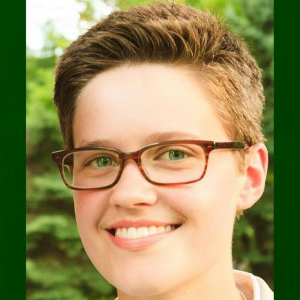 Emily McNeill is the Lead Organizer of the Labor-Religion Coalition of New York State, which works with faith communities to advocate for economic justice in New York. Emily holds an M.Div. from Union Theological Seminary in New York City and is a member of Journey United Church of Christ in Albany.